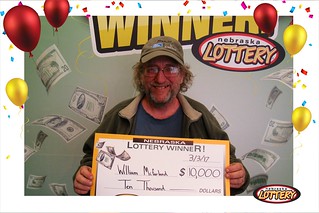 William McFarland of Lincoln won $10,000 playing No Holding Back from the Nebraska Lottery.

While claiming his prize March 3, MacFarland told lottery officials that he plays occasionally and was very surprised when he learned what he had won.

“I’m very happy about winning and I win occasionally,” he said. “I feel grateful and I want to do things the right way.”

McFarland has a few ideas of what he wants to do with the money. As a native of Maine, he grew up being a fan of a baseball team just down the coast – the Boston Red Sox. He hopes to catch a Red Sox game in either Kansas City or St. Louis with his wife over the summer. McFarland has a deep seeded interest in genealogy and wants to use some of the funds to help him learn more about his ancestry. He also plans to donate to charity.