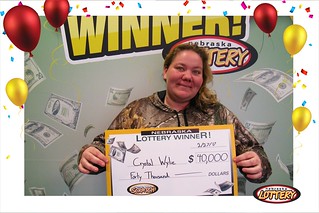 Crystal Wylie of Lincoln won $40,000 playing Naughtier or Nice from the Nebraska Lottery.

While claiming her prize February 27, Wylie told lottery officials that she had stopped at the store on her way to the laundromat in Belmont after an unsuccessful trip to one in Havelock.

Naughtier or Nice was one of the few holiday games left in circulation and it had one top prize remaining at the time of Wylie’s purchase.

“I like buying tickets from the last season,” she said. “I never thought in a million years I would win first prize. This is a good blessing.”

Wylie said that she bought the winning ticket with money from her tax return as a small splurge. She said that the money couldn’t have come at a better time as she and her family are currently looking for a new place to live. The money will be used to for security deposit and rent on a new house and the remainder will be put into college funds for her children.