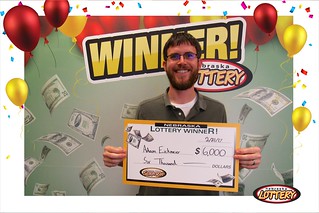 Adam Eickmeier of Lincoln won $6,000 playing Play Is Good from the Nebraska Lottery.

When claiming his prize February 21, Eickmeier told Lottery officials that he had taken the afternoon off work and was enjoying the unseasonably warm weather when he learned that the Nebraska Lottery was having an event at the U-Stop location. He loaded up his dog and drove across town from his home to try his luck. “I had never done the Cash Cube and I came out with 25 tickets,” he said. “When it shut off, they came down and I grabbed them.”

Eickmeier said that the prize money will help fund the kitchen remodel he is working on with his wife.