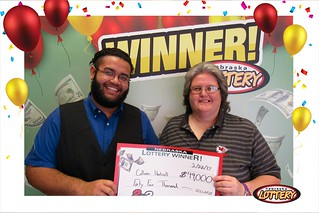 Colleen Hartzell of Omaha won $44,000 playing 2by2 from the Nebraska Lottery.

Hartzell purchased the winning ticket at Quik Trip #587, 4404 North 72nd Street in Omaha. The ticket contained the winning Red ball numbers (6,21) and White ball numbers (11,17) from the February 21 Drawing. Hartzell was able to double the amount of the prize by purchasing 7 draw consecutive draws which made her eligible for the 2by2 Tuesday feature that automatically doubles the prize won on Tuesday.

When she claimed her prize, Hartzell told lottery officials that she had to verify the winning numbers several times before she believed she had won. Hartzell says it was fitting that she won the February 21 drawing as it was her late father’s birthday. “He always looks after us when we have struggles,” she said.

Hartzell plans to use the prize to help her son, Will, celebrate his twentieth birthday as well as pay bills and pay for home improvements.

Two hundred and forty-one Nebraska Lottery players have won the 2by2 top prize to date. The odds of winning the top prize are 1 in 105,625. The overall odds of winning any prize in 2by2, which is also offered in Kansas and North Dakota, are 1 in 3.59.