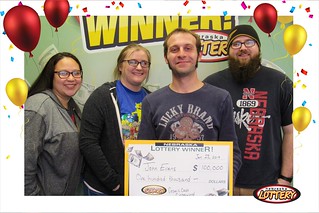 Evans purchased the winning ticket at Smokers Outlet, 1111 West B Street in McCook.

When he claimed his prize, Evans told Lottery officials that he was initially shocked to see that he had won. He second-guessed himself as he inspected the ticket before scanning it and knowing without a doubt that he had won.

With the winnings, he plans to use the money to buy a new car, pay bills and fund home improvements.