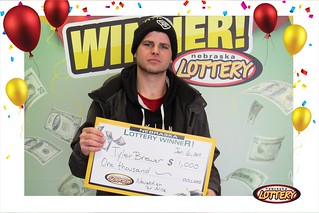 Tyler Brewer of Lincoln won $1,000 playing Naughtier or Nice from the Nebraska Lottery.

Brewer purchased the winning ticket at Super C, 501 West A Street in Lincoln.

While claiming his prize January 6, Brewer told Lottery officials that he came directly to the Nebraska Lottery offices in Lincoln immediately after finding out he had won. Brewer had previously won $10,000 December 17, 2015 playing the Scratch game 20X The Cash. When he saw he won $1,000 he said he couldn’t believe it.