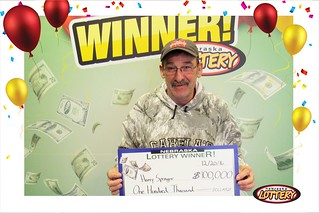 Harry Springer of Cozad won a total of $100,000 playing Nebraska Pick 5 from the Nebraska Lottery.

Springer told Lottery officials that he did not realize there were drawings held on Sunday for Pick 5 until he bought his ticket December 18. When he came to claim his prize, he was dumbfounded. “It’s so hard for me to believe,” he said. “I still don’t believe it.”

With his winnings, Springer plans to pay bills while the remainder will go toward an elk hunting trip in Colorado where his nephew is a guide.