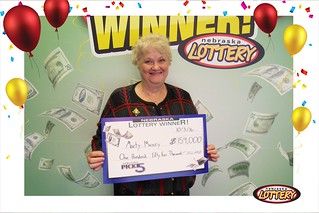 Marty Massey of Omaha won a total of $154,000 playing Nebraska Pick 5 from the Nebraska Lottery.

Massey told Lottery officials that she has been playing the same numbers since she started playing Pick 5 five years ago. The numbers represent the birthdays of each person in her immediate family. “I was just getting ready for bed and I looked up and saw the numbers,” she said. “I turned the computer on and off three times to make sure it was right.”

With her winnings, Massey plans to pay bills while the remainder will go into savings.