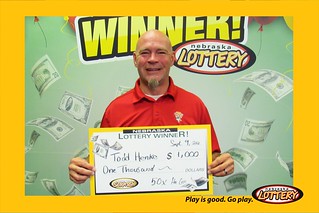 Todd Henke of Lincoln won $1,000 playing the $5 Scratch game 50X the Cash from the Nebraska Lottery.

Henke purchased his winning ticket at Kwik Shop, 4750 Calvert Street in Lincoln. Scratching the ticket, he revealed matching numbers for a corresponding prize of $1,000.

While claiming his prize on September 9, Henke told Nebraska Lottery officials that he was shocked to win the top prize. “Winning $100 or $500 is shocking, but this is extra money that I can use to take care of stuff,” said Henke. He plans to pay bills using his winnings.