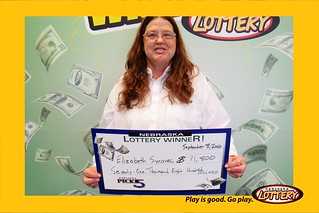 Elizabeth Synovec of Norfolk won a total of $71,800 playing Nebraska Pick 5 from the Nebraska Lottery.

Synovec purchased her winning ticket at Merchant’s C-Store, 400 East Norfolk Avenue in Norfolk. The five-play ticket contained one play with the winning numbers 09, 11, 22, 28, and 30 from the August 29 drawing for the $70,000 jackpot.

The remaining four plays on the ticket matched four of the five winning numbers for $450 each, making Synovec’s total prize $71,800. Synovec told Nebraska Lottery officials that she plans to pay bills and purchase a vehicle using her winnings.