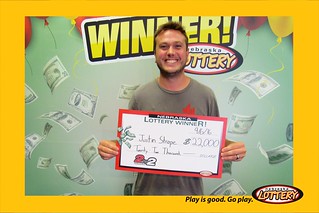 Justin Strope of Hallam won $22,000 playing 2by2 from the Nebraska Lottery.

Strope told Lottery officials that didn’t know he had won until he checked his tickets at Casey’s General Store located at 900 South Street in Lincoln Tuesday, September 6 when he stopped to get something to drink. Strope was excited, but so were the clerks who promptly gave Strope high fives.

With the extra money, Strope plans to pay bills and save. He also plans to continue to play 2by2. “At this rate, if I continue to win, that would work,” he said. “I won’t stop playing until my numbers hit.”

Two hundred and forty-one Nebraska Lottery players have won the 2by2 top prize to date. The odds of winning the top prize are 1 in 105,625. The overall odds of winning any prize in 2by2, which is also offered in Kansas and North Dakota, are 1 in 3.59.