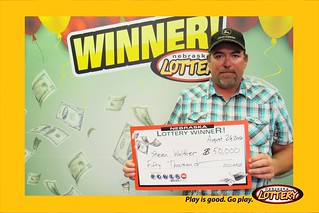 Walther purchased his winning Powerball ticket at Prairie Mart, 747 East North Lake Road in North Platte. The quick pick ticket contained one play with four of the five winning white ball numbers (38, 44, 60, 64, 69) and the Powerball number (6) from the August 13 drawing for $50,000.

While claiming his prize on August 26, Walther told Nebraska Lottery officials that he learned he had won after checking his tickets at a retailer in Grand Island. “We were taking our son to college and I decided to check the ticket when we stopped,” said Walther. “I thought it was just a $7 winner, and I couldn’t figure out why the clerk wouldn't cash it. It was very exciting.” He plans to pay bills using his winnings.