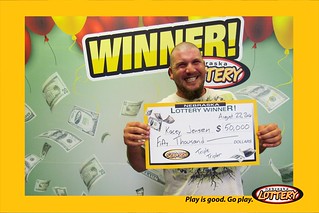 Jensen purchased his winning Triple Tripler ticket at Discount City, 819 East South Street in Hastings. Scratching the ticket, he revealed a winning “3” symbol in Game 4 with a corresponding prize of $50,000.

There were three $50,000 top prizes available in Triple Tripler. Jensen was the third person to claim a top prize in the game.

While claiming his prize on August 22, Jensen told Nebraska Lottery officials that he has been working in the Hasting area for almost a year and buys Lottery tickets at Discount City regularly. He said he was “shocked” to learn he had won the top prize. “I was a bit shaky, but excited,” said Jensen. He plans to pay bills using his winnings.