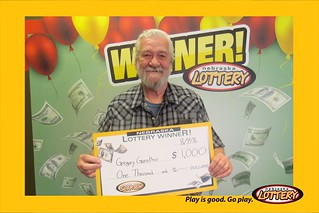 Guenther purchased his winning Mystery Doubler Crossword ticket at Mom’s Corner, 566 West Court Street in Beatrice. Scratching the ticket, he revealed nine complete words in the DOUBLER-GRID for $500. Because one of the words on his ticket used the MYSTERY DOUBLER LETTER, the prize was doubled to $1,000.

When he came in to claim his prize, Guenther told Nebraska Lottery officials that he was pleasantly surprised to win a prize of any amount. He saw he had won $500 but didn’t realize he had doubled that amount until he took his ticket into confirm the prize with the nearest retailer.

“Since I retired I play a little on payday and occasionally through the month, hoping,” he said. “Besides that it’s just plain fun.”

Guenther plans to use the funds to help pay for he and his wife’s medical expenses.