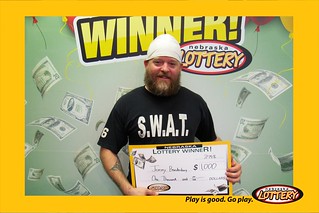 Brandenburg purchased his winning Mystery Doubler Crossword ticket at Super C, 501 West A Street in Lincoln. Scratching the ticket, he revealed 10 complete words in the puzzle for a corresponding prize of $1,000.

Brandenburg told Lottery officials that he was excited to learn he had won. When he saw that his prize was $1,000, he instantly knew what he was going to do. “Good,” he said. “I know I could pay off a few bills.” Brandenburg plans to pay for the remainder of his car payments with the money.