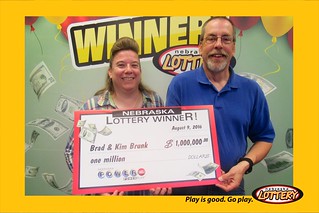 The Brunks have been purchasing Powerball tickets using the same numbers for the last 19 years. Their most-recent winning ticket was purchased at Cubby’s, 15625 Cm Hadan Drive in Bennington and contained one play that matched all five of the winning white ball numbers (11, 17, 21, 23, 32) from the July 30 drawing for $1 million.

While claiming their prize on August 9, the couple told Nebraska Lottery officials that they use the jersey numbers of Kim’s favorite Chicago Cubs players for their ticket numbers. Kim learned they had won after seeing a tweet from WOWT 6 News on the night of the drawing. “I saw that tweet and I thought, ‘Those are my numbers,’” she said. “Then I asked Brad, ‘You did buy a ticket, right?’ We were shocked.”

Brad told Lottery officials he was surprised at how close they had come to winning the $487 million Powerball jackpot. “We were one number away from the big one,” he said. “Our ticket had a six for the Powerball, and the winning number was five.” The couple said they’ll continue to buy tickets every week for more chances to win.

The Brunks stated that they didn’t have any definite plans for the prize yet, but said they would pay bills, set up college funds for their children and grandchildren, and save for retirement.

Powerball is a multi-state jackpot game currently offered by 44 state lotteries, the District of Columbia, Puerto Rico and U.S. Virgin Islands. The odds of winning $1 million playing Powerball are 1 in 11,688,053, while the overall odds of winning any prize are 1 in 24.9.