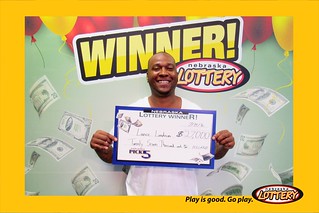 Lance Landrum of Omaha won a total of $27,000 playing Pick 5 from the Nebraska Lottery.

Landrum purchased his winning Nebraska Pick 5 ticket at Big Bear Sinclair, 5608 Ames Avenue in Omaha. The ticket contained one play with the winning numbers 5, 6, 10, 19 and 28 from the June 14 drawing. There were two jackpot winning tickets sold for the $54,000 jackpot, so Landrum’s share of the prize was $27,000.

Landrum claimed his prize July 14. He told Lottery officials that he didn’t know he had a winning ticket until he checked it at a retailer the day before. He was surprised to say the least. “My heart started racing,” he said. “My mind went blank and I wanted to know it was real.”

A father of six, Landrum plans to use the money to help his children with their back-to-school shopping needs and put the remainder into savings.