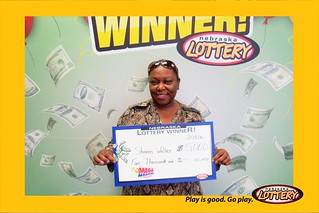 Walker purchased her winning ticket at Kwik Shop, 4400 O Street in Lincoln. The five-play quick pick ticket contained one play with four out of the five winning white ball numbers (6, 13, 21, 49 and 50) and the Megaball number (10) from the June 21 drawing.

While claiming her prize July 11, Walker told Lottery officials she usually plays Powerball but the Mega Millions jackpot was at $540 million so she decided to give it a try.

Walker utilizes her own strategy when buying lottery tickets. Instead of buying a ticket at one location, she will pick one up at several locations. “I figure I just wanted to hit different places,” she said. “I may have a better chance than one location.” She learned she had won after checking her ticket at another Nebraska Lottery retailer. “The clerk said, ‘You’ve gotta take this in – it’s worth $5,000,’” said Walker. “I said, ‘Are you serious?’ Usually it’s just a couple of dollars. I couldn’t believe it.”