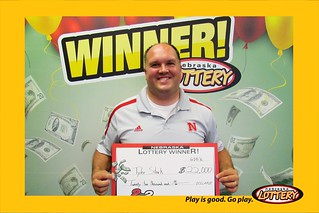 Tyler Stark of Aurora won $22,000 playing 2by2 from the Nebraska Lottery.

While claiming his prize June 28, Stark told Nebraska Lottery officials that his ticket was the last one printed on that particular roll of Lottery ticket stock. “The clerk said ‘must be lucky,’” Stark said. “And he was right.”

Stark also said he has been playing 2by2 regularly because he can play every day of the week. 2by2 is currently the only Lottery game that draws seven days a week.

Two hundred and forty Nebraska Lottery players have won the 2by2 top prize to date. The odds of winning the top prize are 1 in 105,625. The overall odds of winning any prize in 2by2, which is also offered in Kansas and North Dakota, are 1 in 3.59.