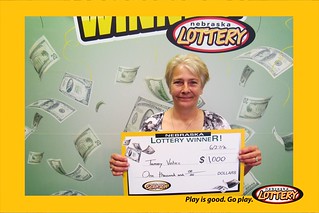 Vostrez purchased her winning ticket at Casey’s General Store, 105 S 13th Street in Hebron. Scratching the ticket, she revealed matching numbers with a corresponding prize of $1,000.

This is the seventh time Vostrez has won a prize while playing a Nebraska Lottery Scratch game. Vostrez owns the Acreage Steakhouse in Hubbell and plans to use the money to take a vacation with her husband Don.