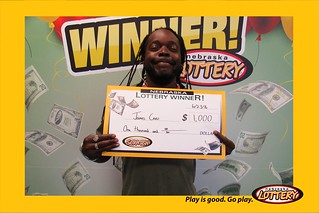 James Cross of York won $1,000 playing the $5 Scratch game 50X the Cash from the Nebraska Lottery.

Cross purchased his winning ticket at Casey’s General Store at 1822 N Lincoln Avenue in York. Scratching the ticket, he revealed matching numbers with a corresponding prize of $1,000.

While claiming his prize June 23, Cross told Lottery officials he would use his winnings to pay the down payment on a new apartment. Cross moved to Nebraska from his home state of New Jersey several months ago. While he has been playing Scratch ticket games for years, this was the first time he had won. When he saw the prize, he was overjoyed. With his newfound luck, he intends to keep playing. “I’m going to keep purchasing tickets,” he said. “Especially 50X The Cash.”