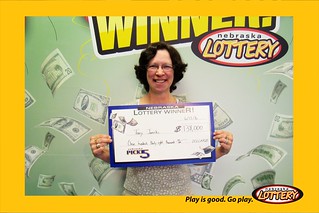 Tracy Jarecki of Omaha won a total of $138,000 playing Nebraska Pick 5 from the Nebraska Lottery.

Jarecki purchased her winning ticket at Hy-Vee Gas #3 at 8829 West Center Road in Omaha. The quick pick ticket contained one play with the winning numbers 3, 6, 14, 30 and 38 from the June 11 drawing.

While claiming her prize on June 13, Jarecki told Lottery officials she plans to purchase a new vehicle with her winnings but not until after she shares some of the prize money. “I’m going to see Maria, the person that sold me the ticket,” Jarecki said. “I always say I’m going to share it if I win.” Jarecki also plans to use the money to care for her mother, who also lives with her.

“She’s a sweet woman, she deserves it,” said Jarecki’s boyfriend Harry Sherrod. “This was a long time coming.”