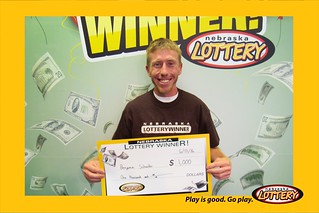 Benjamin Schaeffer of Lincoln won $1,000 playing the $5 Scratch game 50X the Cash from the Nebraska Lottery.

Schaeffer purchased his winning ticket at U-Stop at 6600 North 84th Street in Lincoln.

While claiming his prize June 13, Schaeffer told Lottery officials he would use his winnings to help pay bills but may use some to have fun. “One thing I thought about doing is skydiving,” he said. Schaeffer said he has wanted try skydiving since watching his uncle skydive as a young boy.