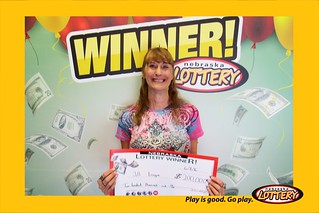 There were more than 18,000 Nebraska Lottery winners in the Saturday, May 21, drawings. Among these winners was League, who purchased her winning ticket at Kelcey’s, 2529 River Road Drive in Waterloo. The ticket contained four of the five winning white ball numbers (5, 7, 9, 18, 32) and the Powerball number (26) from the May 21 drawing for $50,000.

Because League added the $1 Power Play option to her ticket, her prize was multiplied by the 4X Power Play multiplier for a total of $200,000.

While claiming her prize on June 8, League told Nebraska Lottery officials that she has played the same numbers since the Lottery’s inception in 1993. “If you’ve got numbers that you play, just keep playing them,” said League. She learned she had won while watching late-night news. “I just had a feeling and I checked,” said League. “I’m still in shock.” She plans to pay off her mortgage with the winnings.