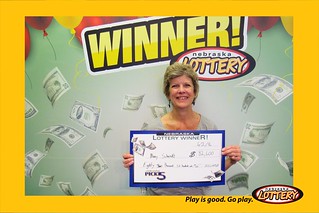 Mary Schendt of Omaha won a total of $118,000 playing Nebraska Pick 5 from the Nebraska Lottery.

Schendt purchased her winning ticket at Family Fare #776, 5101 Harrison Street in Omaha. The ticket contained one play with the winning numbers 2, 3, 5, 9 and 12 from the May 16 drawing.

Schendt told Lottery officials she has been playing the same numbers for years based on the birthdays of her children and grandchildren. “I’ve been playing as long as Pick 5 has been around,” she said. “It’s very exciting. I’ve won $450 a couple of times but never anything like this.” Schendt plans to pay for some home improvements using her winnings then save the rest for the future.