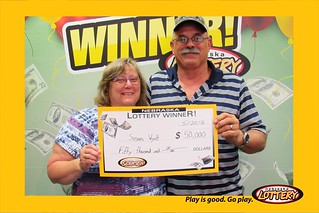 Wyatt purchased her winning ticket at Casey’s General Store #2709, 422 Nasby Street in Cambridge. Scratching the ticket, she matched all the numbers on the CALLER’S CARD for a corresponding prize of $50,000.

There are three $50,000 top prizes available in OGNIB. Wyatt is the second person to claim a top prize to date.

While claiming her prize on May 20, Wyatt told Nebraska Lottery officials that she scratched off her winning ticket while traveling to Omaha for a track meet. “I wasn’t sure that I’d won, so I called the Lottery office to check,” said Wyatt. Learning that the ticket was a $50,000 winner was a shock, she said. “I kept saying, ‘We did it! We did it!’ And now that we’re here getting the check, it’s finally sunk in,” said Wyatt. She plans to pay bills using her winnings.