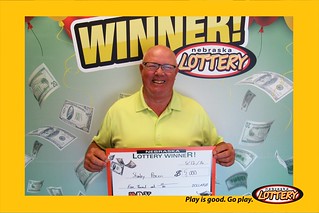 Perrien is no stranger to winning, having won a $5,000 MyDaY prize in July 2010. His most-recent winning MyDaY ticket was purchased at BG’s Corner, 306 South French Street in Sutton. The five-play ticket contained one play with the winning Month (6), Day (1) and Year (87) from the May 3 drawing for the $5,000 top prize.

While claiming his prize on May 12, Perrien told Nebraska Lottery officials that his wife Linda was the first to find out about the winning ticket. “My wife was checking the tickets and then she said, 'Oh look, a $5,000 winner,'” said Perrien. “She wasn’t even surprised.” He plans to save his winnings for the future.