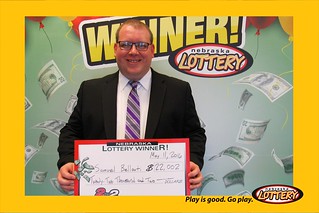 Samuel Bellanti of Gretna won a total of $22,000 playing 2by2 from the Nebraska Lottery.

Bellanti wasted no time claiming his prize, arriving at Nebraska Lottery headquarters the day after the drawing. “I always said I was going to win someday,” said Bellanti. “When I checked the ticket this morning, I couldn’t believe it.” He plans to buy Minnesota Vikings season tickets using his winnings, then save the rest for the future.

Two hundred and thirty-six Nebraska Lottery players have won the 2by2 top prize to date. The odds of winning the top prize are 1 in 105,625. The overall odds of winning any prize in 2by2, which is also offered in Kansas and North Dakota, are 1 in 3.59.