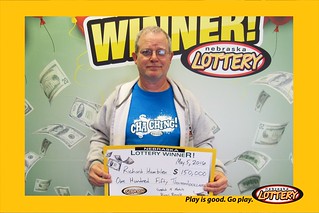 Hamblen purchased his winning Bingo Royale ticket at Family Fare, 1230 North Washington Street in Papillion. Scratching the ticket, he revealed matching numbers in an “X” formation on Card 6 for a corresponding prize of $150,000.

There are three $150,000 top prizes available in Scratch ‘N Match Bingo Royale. Hamblen is the second person to claim a top prize in the game.

While claiming his prize on May 5, Hamblen told Nebraska Lottery officials that he checked the ticket several times before realizing he had won the top prize. “I checked it like four times myself, then I stopped at the store to check it before coming to Lincoln to turn it in,” said Hamblen. He plans to pay bills and set up college funds for his grandchildren using his winnings.