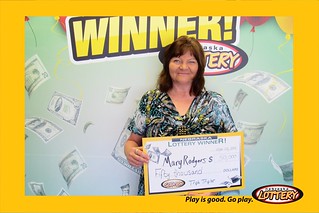 Rodgers purchased her winning Triple Tripler ticket at Lloyd’s Drug Mart, 2600 West Norfolk Avenue in Norfolk. Scratching the ticket, she revealed three winning “3” symbols in a diagonal line for a corresponding prize of $50,000.

There are three $50,000 top prizes available in Triple Tripler. Rodgers is the first person to claim a top prize in the game.

While claiming her prize on May 3, Rodgers told Nebraska Lottery officials that it took her a second to realize she had won the top prize. “I had to put my glasses on to make sure I was seeing what I was seeing,” she said. Rodgers plans to pay bills using her winnings.