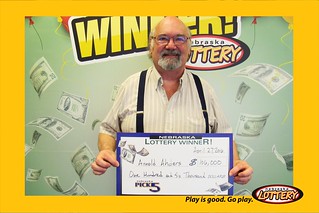 While claiming his prize on April 27, Ahders told Nebraska Lottery officials that he plays Nebraska Pick 5 regularly, purchasing tickets for three draws at a time. He learned he had won after seeing the winning numbers in the Omaha World-Herald newspaper. “At first I thought I’d better look at that ticket a second time,” said Ahders. “I’m very happy to win. It was pleasant surprise.” He plans to pay bills using his winnings.