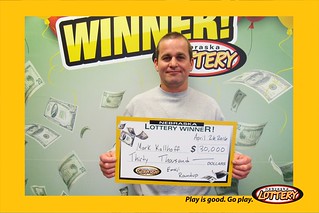 Kalhoff purchased his winning Emoji Roundup ticket at Hy-Vee, 9707 Q Street in Omaha. Scratching the ticket, he revealed one EMOJI with a corresponding prize of $30,000.

There are three $30,000 top prizes available in Emoji Roundup. Kalhoff is the first person to claim a top prize to date.

While claiming his prize on April 26, Kalhoff told Nebraska Lottery officials that he just recently began purchasing Emoji Roundup tickets. “A friend of mine won $500 playing the game, so I decided to start buying tickets,” said Kalhoff. “They’re probably going to be mad when they learn what I won.” He plans to save his winnings for the future.