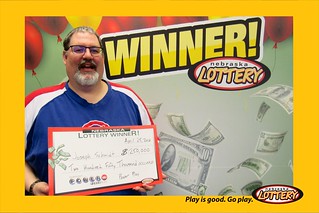 There were more than 18,000 Nebraska Lottery winners in the Saturday, April 23, drawings. Among these winners was Schmidt, who purchased his winning ticket at Frazey Fuels, 317 Whitney Street in Pender. The quick-pick ticket contained four of the five winning white ball numbers (19, 35, 46, 59, 62) and the Powerball number (13) from the April 23 drawing for $50,000.

Because Schmidt added the $1 Power Play option to his ticket, his prize was multiplied by the 5X Power Play multiplier for a total of $250,000.

While claiming his prize on April 25, Schmidt told Nebraska Lottery officials that he buys Lotto tickets every week. “The clerks call it the ‘Joe Special’: a Powerball ticket with Power Play, a Mega Millions ticket with Megaplier, and a Nebraska Pick 5 ticket,” said Schmidt. He learned he had won after checking the winning numbers at the Nebraska Lottery website, nelottery.com. “My Sunday morning ritual is to get a cup of coffee and check the numbers,” said Schmidt. “I thought it wasn’t real, so I called the hotline number and then I woke up my wife to double-check the ticket.” He plans to pay bills using his winnings.

Five hundred and eighteen Nebraska Lottery players have won the Match 4+1 Powerball prize to date. The odds of winning $50,000 playing Powerball are 1 in 11,688,053. Adding the $1 Power Play option, which does not affect the odds of winning, gives players the chance to multiply non-jackpot prizes two, three, four, five or 10 times. The overall odds of winning any prize are 1 in 24.9.