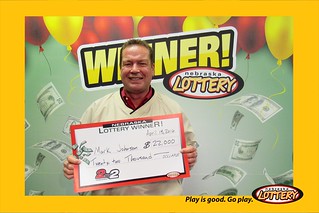 Mark Johnson of Council Bluffs, Iowa won $22,000 playing 2by2 from the Nebraska Lottery.

While claiming his prize on April 18, Johnson told Nebraska Lottery officials that he buys a combination of quick pick plays and plays with numbers he has selected for his 2by2 tickets. He didn’t realize that he had won the $22,000 top prize at first after checking his ticket. “I check the winning numbers every morning, and when I saw those numbers, I said, ‘I’ve gotta double-check my tickets,’” said Johsonson. He had no definite plans for his prize, but indicated that he might take a trip using his winnings.

Two hundred and thirty-one Nebraska Lottery players have won the 2by2 top prize to date. The odds of winning the top prize are 1 in 105,625. The overall odds of winning any prize in 2by2, which is also offered in Kansas and North Dakota, are 1 in 3.59.