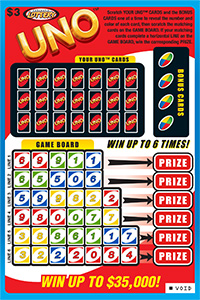 Seaton purchased her winning UNO ticket at Select Mart, 800 Dakota Avenue in South Sioux City. Scratching the ticket, she revealed matching cards in a line on the ticket for a corresponding prize of $35,000.

There are three $35,000 top prizes in UNO. Seaton is the second player to claim a top prize in the game.

While claiming her prize on April 14, Seaton told Nebraska Lottery officials that she was “shocked” to win the top prize. “I just kept looking at the ticket over and over,” said Seaton. “Then I realized this is real.” She plans to purchase a new car using her winnings.