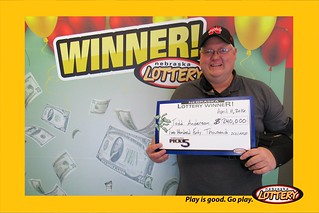 While claiming his prize on April 11, Anderson told Nebraska Lottery officials that he learned a winning Nebraska Pick 5 ticket was sold in Norfolk after seeing a post from one of his friends on Facebook. He then had his ticket checked at a Lottery retailer. “After they ran it through, I was pretty surprised,” said Anderson. He plans to pay bills and take a vacation using his winnings.