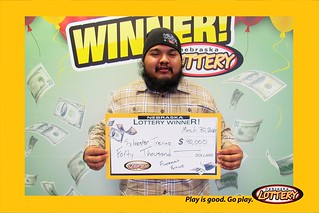 Trevino purchased his winning Fluorescent Fortune ticket at Stagecoach Stop, 320 M Street in Gering. Scratching the ticket, he revealed matching numbers in Game 3 for a corresponding prize of $40,000.

There were three $40,000 top prizes available in Fluorescent Fortune. Trevino was the third person to claim a top prize in the game.

While claiming his prize on March 30, Trevino told Nebraska Lottery officials that he was “shocked” to realize he had won the top prize. “It was a pretty good way to start the day off,” said Trevino. He had no definite plans for his prize money.