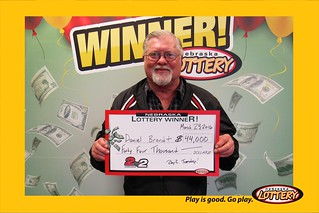 Daniel Brandt of Lincoln won $44,000 playing 2by2 from the Nebraska Lottery.

Because Brandt purchased a seven-draw 2by2 ticket, the ticket was eligible for 2by2 Tuesday where all prizes won on Tuesday are doubled. His $22,000 prize was doubled to $44,000.

While claiming his prize on March 23, Brandt told Nebraska Lottery officials that he learned he had won after seeing the winning numbers in the Lincoln Journal Star newspaper. “My daughter said to call the hotline just to make sure,” said Brandt. “When I heard the numbers, I couldn’t believe it.”

The overall odds of winning any prize in 2by2, which is also offered in Kansas and North Dakota, are 1 in 3.59. The odds of winning the top prize are 1 in 105,625. Players can win double prizes on Tuesday with the 2by2 Tuesday feature and a multi-draw ticket with a draw selection in a multiple of seven.