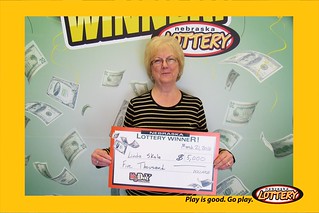 There were more than 15,000 Nebraska Lottery winners in the Saturday, March 19 drawings. Among these winners was Skala, who purchased her winning MyDaY ticket at Casey’s General Store, 1116 North 6th Street in Beatrice. The three-play ticket contained one play with the winning Month (6), Day (24) and Year (03) from the March 19 drawing for the $5,000 top prize.

While claiming her prize on March 21, Skala told Nebraska Lottery officials that she uses family birthdays for her MyDaY numbers. She learned she had won after checking the Nebraska Lottery website, nelottery.com. “I told my husband, ‘I just won $5,000.’ I couldn’t believe it,” said Skala. She plans to pay bills using her winnings.