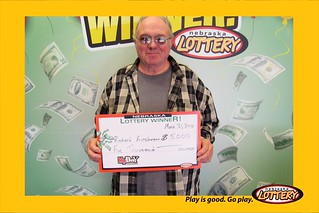 There were more than 13,956 Nebraska Lottery winners in the Friday, March 18 drawings. Among these winners was Kirchmann, who purchased his winning MyDaY ticket at Johnson’s Touch N Go, 109 West Highway 105 in Cedar Bluffs. The ticket contained the winning Month (3), Day (13) and Year (48) from the March 18 drawing for the $5,000 top prize.

While claiming his prize on March 21, Kirchmann told Nebraska Lottery offiicals that he purchases the same MyDaY date every week. He said he “couldn’t believe it” when he realized he had won the top prize. He plans to save his winnings for the future.