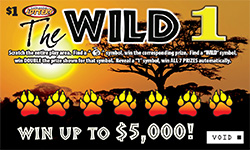 Lorraine Leininger of Seward won $5,000 playing the $1 Scratch game The Wild 1 from the Nebraska Lottery.

Leininger purchased her winning The Wild 1 ticket at Gas N Snaks, 541 Jackson Avenue in Seward. Scratching the ticket, she revealed one winning “MONEY BAG” symbol for a corresponding prize of $5,000.

There are three $5,000 top prizes available in The Wild 1. Leininger is the first person to claim a top prize to date.

While claiming her prize on March 21, Leininger told Nebraska Lottery officials that she purchased her winning ticket while stopping at Gas ‘N Snaks to pick up a newspaper. “I told the clerk to give me a $1 ticket for any game,” said Leininger. She scratched the ticket later then returned to the store to double-check the ticket. “I asked the clerk, ‘Is this real?’ I couldn’t believe it,” said Leininger. She plans to pay bills and take and trip to celebrate her wedding anniversary using her winnings.