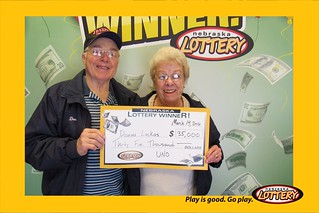 Donald and Donna Lackas of Fremont won $35,000 playing the $3 Scratch game UNO from the Nebraska Lottery.

Donald Lackas purchased two UNO tickets at Kwik Shop, 710 North Broad Street in Fremont. He gave one ticket to his wife Donna, who scratched the ticket and revealed matching cards in one line on the ticket for a corresponding prize of $35,000.

There are three $35,000 top prizes in UNO. Donald and Donna are the first players to claim a top prize in the game.