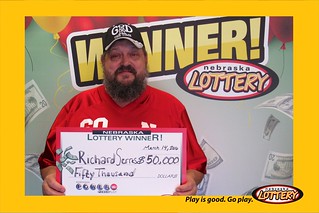 Serres purchased his winning Powerball ticket at Common Cents Food Store, 301 West Main Street in Chadron. The ticket was good for 24 drawings and contained one play with four of the five winning white ball numbers (7, 17, 27, 29, 40) and the Powerball number (25) from the February 17 drawing for $50,000.

Because Serres purchased a multi-draw ticket, his ticket also matched the winning Powerball number (25) from the February 20 drawing for $4, making his total prize $50,004.

While claiming his prize on March 13, Serres told Nebraska Lottery officials that he learned he had won the $50,000 prize after his wife saw a post on Facebook showing that a winning ticket was sold at Common Cents. He said he “jumped up and down” several times then called his children to share the good news. Serres plans to using his winnings to save for his upcoming retirement. “It sure helps ease my mind about deciding to retire,” he said.