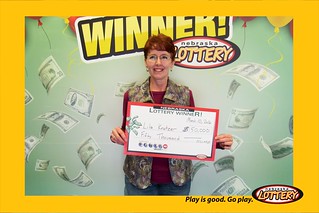 Kratzer purchased her winning Powerball ticket at Casey’s General Store, 4150 West Highway 30 in Grand Island. The quick pick ticket contained one play with four of the five winning white ball numbers (14, 23, 32, 34, 68) and the Powerball number (3) from the March 9 drawing for $50,000.

Kratzer wasted no time claiming her prize, arriving at Nebraska Lottery headquarters the day after the drawing. She told Nebraska Lottery officials that she purchased her winning ticket during a recent trip to Grand Island. Kratzer didn’t realize she had won $50,000 at first, and asked her husband to double-check the ticket. “I sent Mike a picture of the ticket, and he said, ‘I’m coming home – we’re going to Lincoln,’” said Kratzer. The couple stated they would pay bills using the prize money.