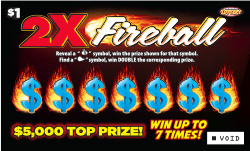 There were three $5,000 top prizes available in 2X Fireball. Gibbs was the third person to claim a top prize in the game.