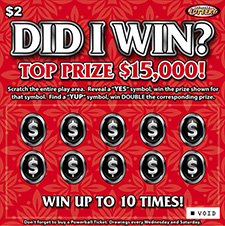 Joseph Wlaschin of Scottsbluff won $15,000 playing the $2 Scratch game Did I Win? from the Nebraska Lottery.

Wlaschin purchased his winning Did I Win? ticket at 5th & O Eastco, 503 East Overland Street in Scottsbluff. Scratching the ticket, he revealed one winning “YES” symbol with a corresponding prize of $15,000.

There are three $15,000 top prizes available in Did I Win? Wlaschin is the first person to claim a top prize to date.