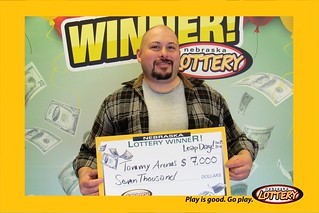 Arenas purchased his winning Quick 7s ticket at Casey’s General Store, 3500 North 48th Street in Lincoln. Scratching the ticket, he revealed seven winning “7” symbols with corresponding prizes of $1,000, for a total of $7,000.

There are six $7,000 top prizes in this edition of Quick 7s. Arenas is the first person to claim a top prize to date.

While claiming his prize on February 29, Arenas told Nebraska Lottery officials that he purchased six tickets and split them with his girlfriend. They scratched off the tickets and discovered that Arenas had the top prize-winning ticket. “I said, ‘All you need to find is a 7? I’ve got seven of them,’” said Arenas. “I didn’t believe it. I’d never won anything like that before.” He plans to give half of the prize to his girlfriend, and then use his share to buy some new tires for his truck.