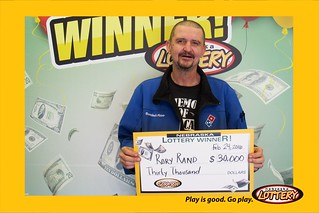 Rand purchased his winning Digging Diamonds ticket at Kwik Shop, 2811 North 48th Street in Lincoln. Scratching the ticket, he completely uncovered one winning DIAMOND symbol in the MINE GRID for a corresponding prize of $30,000.

There were three $30,000 top prizes available in Digging Diamonds. Rand was the third person to claim a top prize in the game.

While claiming his prize on February 24, Rand told Nebraska Lottery officials that he didn’t believe he had won the top prize at first. “I thought, ‘I’ll never get it because that’s what always happens,’” said Rand. Then he had the clerk at Kwik Shop scan the ticket at the lottery terminal. “I was totally in shock,” said Rand. He plans to pay bills and take a trip using his winnings.