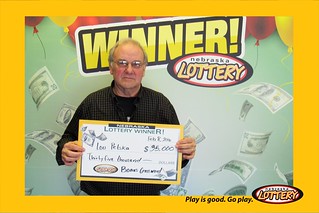 Petska purchased his winning ticket at Hy-Vee Gas, 118 Wilmar Avenue in Grand Island. Scratching the ticket, he revealed 10 complete words in the puzzle for a corresponding prize of $35,000.

Bonus Crossword has nine top prizes. Petska is the sixth person to claim a top prize in the game.

While claiming his prize on February 8, Petska told Nebraska Lottery officials that he didn’t realize he had won the top prize at first. He overlooked scratching off one of the letters in the puzzle and thought he had eight words instead of 10. “I thought it was worth $100, but it turned out to be $35,000” said Petska. He plans to pay bills using his winnings.