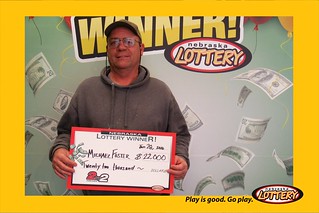 Michael Foster of Denton won a total of $22,003 playing 2by2 from the Nebraska Lottery.

Foster purchased his winning ticket at Mills Squeegee Fill, 7229 Lancaster Street in Denton. The five-play ticket contained one play with the winning Red ball numbers (4, 14) and White ball numbers (1, 21) from the January 21 drawing for $22,000.

While claiming his prize on January 28, Foster told Nebraska Lottery officials that he learned he had won after checking the winning numbers at the Nebraska Lottery website, nelottery.com. “It was quite a shock,” he said. Foster plans to buy some new golf clubs and pay bills using his winnings.